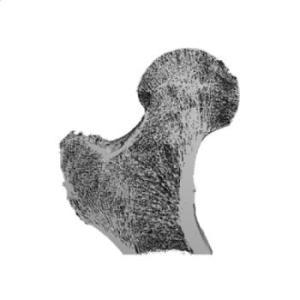 Feb. 1, 2013 — The form and structure of bones change as a result of the forces to which they are subjected. Researcher Patrik Christen of Eindhoven University of Technology has used this fact to determine the load using the bone structure. This knowledge can be important in predicting the progress and treatment of bone diseases, as well as for understanding the walking behavior of extinct species. Christen will gain his PhD at TU/e on February 4.
The ability of the skeleton to adapt to the way in which it is loaded is well known as Wolff's law. Bone tissue contains special cells that are sensitive to the mechanical forces acting on the bone. More bone mass is produced where the pressure on the bone is high, and bone tissue is lost where the pressure is low. This process is easily visible, for example in tennis players, where the heavily loaded playing arm gains extra bone mass, or in astronauts, where bone mass in the legs is lost after space travel as a result of the low load.
Algorithm Christen used the opposite of Wolff's law, that the bone structure reveals information about the loads experienced in the past. He has developed an algorithm that searches micro-CT-scan images for load‑generated patterns in the microstructure of bones. The program translates these into a load distribution in the bone. Christen has used this method on wrist, hip and other bones, and his findings corresponded well to load data obtained in other studies. According to Christen his Orthopaedic Biomechanics research group at TU/e is the only one in the world that is able to reveal the load history of a bone on the basis of its microstructure.
Applications The method has a number of practical applications. For example knowledge of the bone loading patterns is important to allow better prediction of the development of bone diseases like osteoporosis, and to estimate the effectiveness of particular treatments. This can help to prevent painful and dangerous bone fractures. Christen's method can also help to improve the shape of an implant to reduce the chance that it will later become detached. Finally, Christen expects that the method can be used to clarify the walking behavior of extinct species such as dinosaurs and our own ancestors, based on the bone structures found in fossils.
Patrik Christen will gain his PhD on Monday 4 February at Eindhoven University of Technology (TU/e) on his thesis entitled 'Deciphering the Secret Message within Bone Microstructure'. His supervisor is prof.dr. Keita Ito, TU/e professor of Orthopaedic Biomechanics, and his Copromotor is dr.ir. Bert van Rietbergen
Posted by OnPodiatry