New Ligament Discovered in the Knee

Two knee surgeons at University Hospitals Leuven have discovered a previously unknown ligament in the human knee. This ligament appears to play an important role in patients with anterior cruciate ligament (ACL) tears. 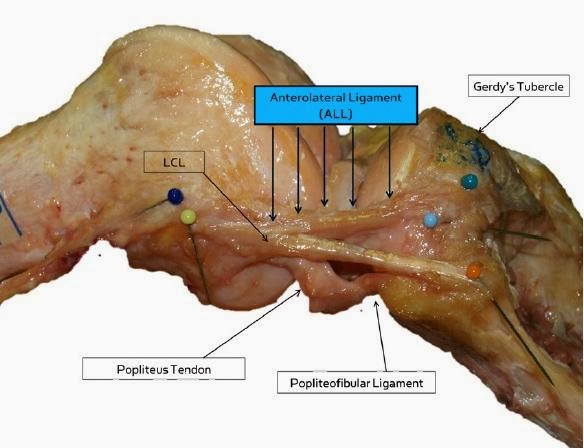 AnteroLateral Ligament
‪Despite a successful ACL repair surgery and rehabilitation, some patients with ACL-repaired knees continue to experience so-called 'pivot shift', or episodes where the knee 'gives way' during activity. For the last four years, orthopedic surgeons Dr Steven Claes and Professor Dr Johan Bellemans have been conducting research into serious ACL injuries in an effort to find out why. Their starting point: an 1879 article by a French surgeon that postulated the existence of an additional ligament located on the anterior of the human knee.
That postulation turned out to be correct: the Belgian doctors are the first to identify the previously unknown ligament after a broad cadaver study using macroscopic dissection techniques. Their research shows that the ligament, which was given the name anterolateral ligament (ALL), is present in 97 per cent of all human knees. Subsequent research shows that pivot shift, the giving way of the knee in patients with an ACL tear, is caused by an injury in the ALL ligament.
Some of the conclusions were recently published in the Journal of Anatomy. The Anatomical Society praised the research as "very refreshing" and commended the researchers for reminding the medical world that, despite the emergence of advanced technology, our knowledge of the basic anatomy of the human body is not yet exhaustive.
‪The research questions current medical thinking about serious ACL injuries and could signal a breakthrough in the treatment of patients with serious ACL injuries. Dr Claes and Professor Bellemans are currently working on a surgical technique to correct ALL injuries. Those results will be ready in several years.
#podiatry #orthopedics #biomechanics
Posted by OnPodiatry