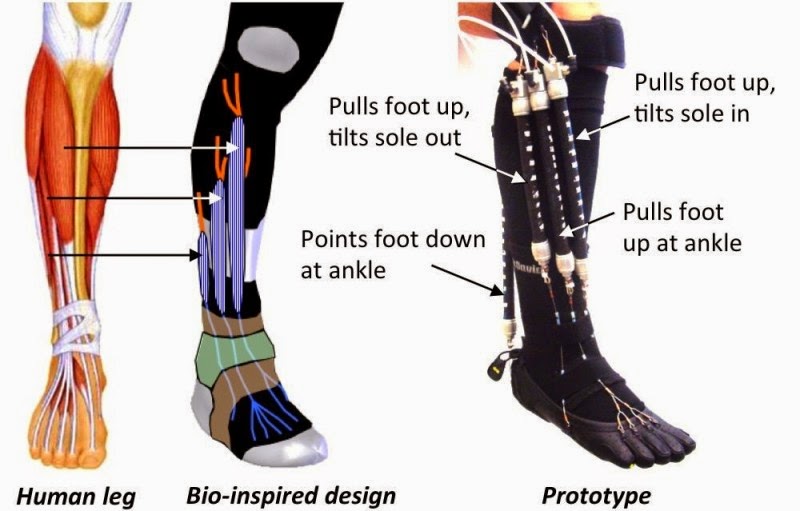 A soft, wearable device that mimics the muscles, tendons and ligaments of the lower leg could aid in the rehabilitation of patients with ankle-foot disorders such as drop foot, said Yong-Lae Park, an assistant professor of robotics at Carnegie Mellon University.

Park, working with collaborators at Harvard University, the University of Southern California, MIT and BioSensics, developed an active orthotic device using soft plastics and composite materials, instead of a rigid exoskeleton. The soft materials, combined with pneumatic artificial muscles (PAMs), lightweight sensors and advanced control software, made it possible for the robotic device to achieve natural motions in the ankle.

The researchers reported on the development in the journal Bioinspiration & Biomimetics.
Park, who did the work while a post-doctoral researcher at Harvard's Wyss Institute for Biologically Inspired Engineering, said the same approach could be used to create rehabilitative devices for other joints of the body or even to create soft exoskeletons that increase the strength of the wearer.
The robotic device would be suitable for aiding people with neuromuscular disorders of the foot and ankle associated with cerebral palsy, amyotrophic lateral sclerosis, multiple sclerosis or stroke. These gait disorders include drop foot, in which the forefoot drops because of weakness or paralysis, and equinus, in which the upward bending motion of the ankle is limited. Conventional passive ankle braces can improve gait, but long-term use can lead to muscle atrophy because of disuse.

Active, powered devices can improve function and also help re-educate the neuromuscular system, Park said. "But the limitation of a traditional exoskeleton is that it limits the natural degrees of freedom of the body," he added. The ankle is naturally capable of a complicated three-dimensional motion, but most rigid exoskeletons allow only a single pivot point.

The soft orthotic device, by contrast, enabled the researchers to mimic the biological structure of the lower leg. The device's artificial tendons were attached to four PAMs, which correspond with three muscles in the foreleg and one in the back that control ankle motion. The prototype was capable of generating an ankle range of sagittal motion of 27 degrees -- sufficient for a normal walking gait.
The tradeoff, however, is that the soft device is more difficult to control than a rigid exoskeleton. It thus required more sophisticated sensing to track the position of the ankle and foot and a more intelligent scheme for controlling foot motion, Park said. Among the innovations in the device are sensors made of a touch-sensitive artificial skin, thin rubber sheets that contain long microchannels filled with a liquid metal alloy. When these rubber sheets are stretched or pressed, the shapes of the microchannels change, which in turn causes changes in the electrical resistance of the alloy. These sensors were positioned on the top and at the side of the ankle.

Park said additional work will be necessary to improve the wearability of the device. This includes artificial muscles that are less bulky than the commercially produced PAMs used in this project. Park said a subsequent project, which will be presented at an upcoming technical conference, used flat, strap-like actuators instead of the cylindrical PAMs.

The device has yet to be tested on patients to determine its performance as a rehabilitative tool.
A video of the device is available on YouTube: http://www.youtube.com/watch?v=IbXRiTbuDvY

Story Source:
The above story is based on materials provided by Carnegie Mellon University. Note: Materials may be edited for content and length.