Non-surgical graft with patient's own skin for diabetic wounds #CelluTome 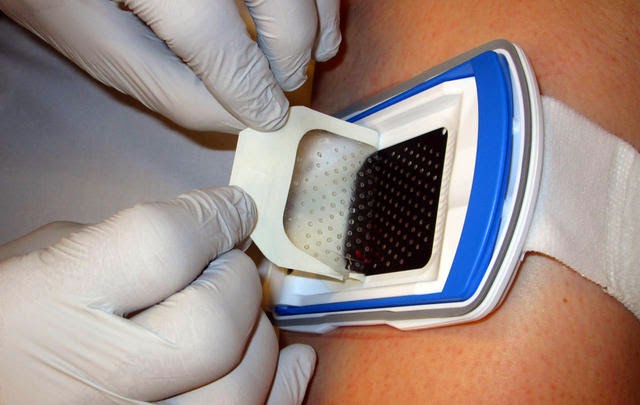 A novel system in the treatment of diabetic foot ulcers allows for a nonsurgical approach in which skin harvested from a swath of tiny blisters created with heat and suction is applied to a wound, potentially avoiding the need for anesthesia or exposing patients to the risk of surgical complications.
The emerging use of the system, called CelluTome (KCI - Kinetic Concepts Inc), for the treatment of diabetic foot ulcers earned it a spot on Podiatry Today's "Top 10 Innovations in Podiatry."

The system uses a vacuum and warming technique to raise approximately 100 uniform epidermal blisters on the thigh. The blistered skin, along with basal keratinocytes, is then removed with a disposable blade at the dermal-epidermal junction and transplanted to the wound site with the use of adhesive film in a process that takes less than an hour. The technique for blistering is supposed to be painless.

"If I can just take 40 minutes to apply heat and suction and then put the skin (on diabetic foot ulcer) and the patient doesn't have any pain, then that's a win for me," Lee C. Rogers, DPM, medical director of the Amputation Prevention Center at Sherman Oaks Hospital, California, told Medscape Medical News.

Dr. Rogers, whose center is among the first in the United States to use the system for diabetic foot ulcers, says he has performed the technique on approximately 50 patients.
The system represents a significant improvement over the much more involved surgical process for a split-thickness skin graft, which involves scheduling a surgery, placing the patient under anesthesia, having them endure recovery pain and the risk for complications, and a heightened risk for infection, he said.

"This system allows you to avoid all of that," he said. "You don't have to be a surgeon to do this because it's an office-based procedure with minimal risk."
In addition to negating the need for surgery, the system allows for only minimal damage to the donor site, said KCI Chief Medical Officer Ron Silverman, MD, in a company press statement. "For patients, this means that we aren't creating a new wound to save another," he said.
The donor site heals within a few days, with minimal pain and only rare bleeding, according to the company.

Patients who would not be appropriate candidates for the procedure would include those with large foot wounds, as the device covers a surface area of only about 3 by 4 inches, Dr. Rogers said. He added that those with wounds that are infected, necrotic, or gangrenous are probably not appropriate. "No grafting procedure would work on those." With infections from foot ulcers representing the most common cause of amputations in diabetes, the ability to quickly treat the ulcers is important, Dr. Rogers said.

"We specialize in preventing amputation, and in dealing with people with diabetes who may have gangrene or infection, we're very cognizant of getting that wound closed as soon as possible. Otherwise it will just get worse and the wound may result in an amputation. With standard care, multiple, time-consuming visits can be necessary for treatment, and this offers a useful tool for getting the wound closed faster."

The CelluTome device's US Food and Drug Administration approval is not wound specific, but among its initial uses was in the treatment of vitiligo. While there have been no clinical trials on CelluTome use for diabetic foot ulcers, a multicenter, randomized clinical trial is in the works to evaluate the safety and efficacy of epidermal grafting with the CelluTome system and multilayer compression therapy for the healing of venous leg ulcers compared with multilayer compression therapy alone.

Other treatments pertaining to diabetic foot ulcers included in the Podiatry Today list of top 10 innovations were Hyalomatrix (Anika Therpeutics), a hyaluronic acid–based wound dressing using a "3-dimensional scaffold to promote cellular invasion and capillary growth," according to the article; a 128-Hz electric tuning fork that the manufacturer, O'Brien Medical, says can identify patients at risk for diabetic neuropathy and limb loss; and Enluxtra Self-Adaptive Wound Dressing (OSNovative Systems), said to have the unique adaptability to provide hydration or absorption based on the needs of the wound as it heals.
Posted by OnPodiatry