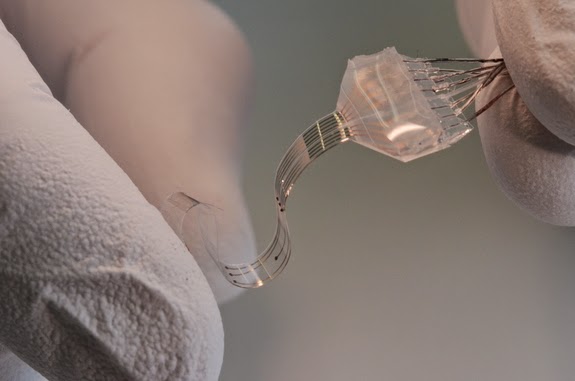 An experimental flexible implant that connects directly to the spinal cord might someday lead to a treatment for people with spinal cord injuries, and could possibly help people with paraplegia move again, researchers say.

Now, researchers at the Swiss Federal Institute of Technology in Lausanne have built such an implant. They call the soft, stretchable device "e-dura," after the dura mater, which is one of the layers of protective membranes that surround the brain and spinal cord. The researchers implanted the device into rats — it rests on the spinal cord, and delivers electric signals, as well as drugs, to the surrounding nerves, triggering them to fire impulses.

In experiments, paralyzed rats that were implanted with the device regained the ability to walk, with some help.


Previously, it had been difficult for scientists to find a way to connect an electronic device to the spinal cord without damaging it. One obstacle is that electronics are made of stiff materials, whereas the spinal cord and its protective covering are more flexible.

"The spinal cord expands and relaxes," saidStéphanie Lacour, chairwoman of neuroprosthetic technology at the institute and one of the leaders of the new research. "If you have a hard, nondeformable material, the friction and rubbing cause inflammation."

To make the e-dura, Lacour's team used a polymer for the implant's basic structure, and gold for the electrodes. The implant also has tiny channels for drug delivery.

Although gold is flexible, it doesn't stretch. To make the metal more elastic, the researchers laid it down in layers just 35 nanometers (0.000035 milimeters) thick, with tiny cracks in the layers. This turned the gold into a meshlike structure that could stretch.

To test the implants, the scientists did a series of experiments on rats. First, the researchers looked at whether the e-dura integrated well with the rats' bodies, to minimize the chance that their bodies would reject it. They tested three groups of animals: one that was implanted with the e-dura, a second that got an implant made of a stiffer material and a third that underwent surgery but received no implant. (The third group served as a control.)

The researchers found that, even after eight weeks, the e-dura had not caused any deformation of the animals' spinal cords, nor had it triggered an immune system reaction, such as inflammation. The implants that were made of the stiffer material caused changes in the spinal cord's shape, compressing and rubbing on it, and producing a "foreign body" immune response. The rats also had trouble walking and balancing.
In previous work, other researchers had demonstrated mind-controlled prosthetic arms, and the U.S. military is looking at implants to help soldiers with brain injuries. And devices such as cochlear implants and pacemakers have helped heart patients for years.

The second part of the new research was to test the ability of the e-dura to record neural impulses. The researchers inserted the device into the place where the dura mater normally is, next to the rats' motor cortexes — the region of the brain that controls voluntary movement — and found what kind of signals generated in that brain region were associated with therats' intention to move their legs, or stand still. The implant showed that it could "read" the signals.

"It's about finding a way to get the right signal from the brain — to really get precise measurement or recording of the intention of walking," Lacour said.
Lastly, the researchers tested the e-dura's ability to work with the motor nerves. First, the researchers inflicted spinal injury on the rats that mimics the type many humans get in accidents, called a contusion. Then, they inserted the e-dura into the dura mater below the injury site. The rats received both electrical stimulation and doses of the brain chemical serotonin via the e-dura.

Within a few weeks, the rats were able to walk again, with assistance from the machine that provided the stimulation. The rats were not controlling the motion of their legs; rather, the device was picking up artificial signals and getting them to the nerves.

"The importance of this paper, in my view, is that it provides a very powerful case that soft mechanics is critically important to the proper operation of implants of this class," saidJohn A. Rogers, a professor of materials science and engineering at the University of Illinois, who was not involved in the research.
Even though the work goes a long way toward helping researchers figure out how to design spinal implants, there's a lot of work to do before these devices can help human patients. For one thing, the rats had to be physically connected to a stimulation device to walk. "We want to get rid of the wires," Lacour said.
There was also no voluntary movement. For a real treatment, researchers would want actual signals from the brain, rather than an outside device to could control a patient's movement.

The research is published in the Friday Jan. 9 issue of the journal Science.
Posted by OnPodiatry

Email ThisBlogThis!Share to TwitterShare to FacebookShare to Pinterest
Labels: research