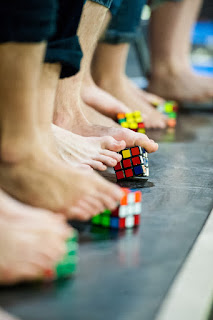 Sao Paulo, Brazil just hosted the global Speedcubing elite at the Rubik’s Cube World Championship – the first time that the competition has ever been held in South America.

At Colegio Etapa, a school in the centre of Sao Paulo, Brazil’s Gabriel Pereira Campanha completed the iconic puzzle in an average time of 32.51 seconds – especially impressive seeing as he used only his feet. This time was enough to earn him the crown in his first ever World Championship.

In a tight contest, he beat 2013 champion Jakub Kipa of Poland, whose average of 36.44 seconds was just enough to hold on to second place ahead of Japan’s Yuhei Takagi, who averaged 36.66 seconds.

Other notable results were:

The feet-only category was one of 18 different events at the 2015 Rubik’s Cube World Championship. Competitions included:

Film of the 3 x 3 Rubik’s Cube ‘With Feet’ event can be found here: https://www.youtube.com/watch?v=mFao2UY1Uxo

To see a full list of results, please go to the official website at https://www.worldcubeassociation.org/results/c.php?i=WC2015
Posted by OnPodiatry

Email ThisBlogThis!Share to TwitterShare to FacebookShare to Pinterest
Labels: Just for Fun