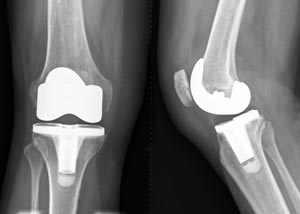 Contrary to recent reports, Boston-based researchers found that osteoarthritis patients who had total knee or hip joint replacement surgery, known as arthroplasty, were at increased risk of heart attack (myocardial infarction) in the early post-operative period. However, findings published in Arthritis & Rheumatology, a journal of the American College of Rheumatology (ACR), indicate that long-term risk of heart attack did not persist, while the risk for venous thromboembolism -- blood clot in veins and lungs -- remained years after the procedure.

Osteoarthritis is the most common form of arthritis, affecting 27 million Americans over the age of 25 according to the ACR. As the joint cartilage and bone deteriorates, knee or hip replacement surgery may be the only option to relieve pain and stiffness, and restore mobility. Previous studies estimate that 1.8 million arthroplasty procedures are performed each year worldwide, and that number may increase as the population ages.

"While evidence shows that joint replacement surgery improves pain, function, and quality of life for the osteoarthritis patient, the impact of cardiovascular health has not been confirmed," explains lead study author Yuqing Zhang, D.Sc., Professor of Medicine and Epidemiology at Boston University School of Medicine in Boston, Massachusetts. "Our study examines if joint replacement surgery reduces risk of serious cardiovascular events among osteoarthritis patients."

The present cohort study included 13,849 patients who underwent total knee replacement surgery and 13,849 matched controls who did not have surgery. Patients were 50 years of age or older and diagnosed with knee or hip osteoarthritis between January 2000 and December 2012.

Findings indicate that 306 patients in the arthroplasty group and 286 in the non-surgical group developed myocardial infarction during the follow-up period. Risk of heart attack was significantly higher during the first postoperative month in those who had knee replacement surgery compared to those in the non-surgical group, and gradually declined over time. Venous thromboembolism was a significant risk during the first month and over time for those having total knee or total hip arthroplasty.

"Our findings provide the first general population-based evidence that osteoarthritis patients who have total knee or total hip replacement surgery are at increased risk of heart attack in the immediate postoperative period," concludes Dr. Zhang. "The long-term risk of heart attack was insignificant, but risk of blood clots in the lung remained for years after surgery to replace a hip or knee damaged by osteoarthritis."

Story Source:
The above post is reprinted from materials provided by Wiley. Note: Materials may be edited for content and length.

Wiley. "Knee and Hip Replacements May Be Bad for the Heart." ScienceDaily. ScienceDaily, 31 August 2015.
Posted by OnPodiatry