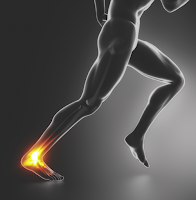 Achilles tendon disorders are common and often misdiagnosed, with about 25 percent of ruptures missed during initial examination, but the prognosis is favorable for the vast majority of patients, according to researchers from Rowan University School of Osteopathic Medicine and the Rothman Institute of Jefferson Medical College.

Their clinical review, published in the November edition of The Journal of the American Osteopathic Association, noted that most patients healed better with conservative treatment. Surgery should be reserved for acute tears occurring in young or very active patients.

"As an osteopathic physician, we approach treating injuries with the least amount of surgical intervention possible," said Joseph N. Daniel, DO, clinical associate professor of orthopaedic surgery at Jefferson Medical College in Philadelphia. "Injuries of the Achilles are no different, and this study validates that most patients are better off with conservative treatment."

Dr. Daniel noted that surgical intervention in younger, athletic patients is associated with lower rates of re-rupture and a quicker return to activity. Diagnostic imaging, such an ultrasound or MRI, is not recommended unless rupture is suspected.

The Achilles tendon is the largest tendon in the body and functions as the structural gateway between the leg, ankle, and foot. Its function is critical for walking, running, and jumping, so the injury is often associated with athletes, of whom eight percent will likely experience an acute rupture during their lifetime. About 24 percent of athletes will battle chronic tendinopathy at some point, researchers noted.

In acute cases, patients often report hearing a popping sound at the time of injury. Chronic ruptures and other Achilles injuries typically involve heel pain or discomfort that coincides with physical activity. Primary care physicians are urged to evaluate those with similar complaints for Achilles injuries and take a conservative approach to treatment.

"Mismanaged or neglected injuries will markedly decrease a patient's quality of life," said Dr. Daniel. "In all but a select few cases, we can resolve the issue with rest, over-the-counter medication, physical therapy, or a few weeks in a walking boot."
Story Source:
American Osteopathic Association. "Achilles tendon ruptures missed in one of four cases, but surgery not needed for most: Study finds proper diagnosis and conservative treatment yield consistently good results for majority of patients." ScienceDaily. ScienceDaily, 29 October 2015.
Journal Reference: