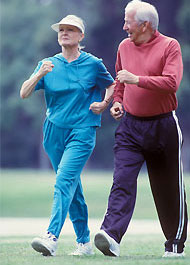 In an analysis that included data from 9 studies, having higher measures of walking speed among older adults was associated with increased length of survival, according to a study in the January 5 issue of JAMA.

"Remaining years of life vary widely in older adults, and physicians should consider life expectancy when assessing goals of care and treatment plans. However, life expectancy based on age and sex alone provides limited information because survival is also influenced by health and functional abilities," according to background information in the article. There are currently no well-established approaches to predicting life expectancy that incorporate health and function. Gait speed, or walking speed, has been recommended as a potentially useful clinical indicator of well-being among older adults.

Stephanie Studenski, M.D., M.P.H., of the University of Pittsburgh, and colleagues conducted a study to assess the association of gait speed with survival in older adults and to determine the degree to which gait speed explains variability in survival after accounting for age and sex. The study included a pooled analysis of 9 participating studies (collected between 1986 and 2000), using individual data from 34,485 community-dwelling adults age 65 years or older with walking speed data available at the beginning of the study, followed up for 6 to 21 years. Participants had an average age of 73.5 years; 59.6 percent were women; and 79.8 percent were white. Gait speed was calculated for each participant using distance in meters and time in seconds. All studies used instructions to walk at usual pace and from a standing start. The walk distance varied from 8 feet to 6 meters. The average gait speed of the participants was 0.92 meters (3 feet) per second.

"Predicted years of remaining life for each sex and age increased as gait speed increased, with a gait speed of about 0.8 meters [2.6 feet]/second at the median [midpoint] life expectancy at most ages for both sexes. Gait speeds of 1.0 meter [3.3 feet]/second or higher consistently demonstrated survival that was longer than expected by age and sex alone. In this older adult population the relationship of gait speed with remaining years of life was consistent across age groups, but the absolute number of expected remaining years of life was larger at younger ages," the authors write.

The researchers also found that predicted survival based on age, sex, and gait speed was as accurate as predictions based on age, sex, use of mobility aids, and self-reported function or as age, sex, chronic conditions, smoking history, blood pressure, body mass index, and hospitalization.
The authors suggest there are several reasons why gait speed may predict survival. "Walking requires energy, movement control, and support and places demands on multiple organ systems, including the heart, lungs, circulatory, nervous, and musculoskeletal systems. Slowing gait may reflect both damaged systems and a high energy cost of walking."

The researchers write that there are a number of ways gait speed might be used clinically, including helping to identify older adults with a high probability of living for 5 or 10 more years, who may be appropriate targets for preventive interventions that require years for benefit. Gait speed might be used to identify older adults with increased risk of early mortality, perhaps those with gait speeds slower than 0.6 meter (2 feet)/second. "In these patients, further examination is targeted at potentially modifiable risks to health and survival." Also, gait speed might be monitored over time, with a decline indicating a new health problem that requires evaluation.

"The data provided herein are intended to aid clinicians, investigators, and health system planners who seek simple indicators of health and survival in older adults. Gait speed has potential to be implemented in practice, using a stop watch and a 4-meter [13 feet] course. From a standing start, individuals are instructed to walk at their usual pace, as if they were walking down the street, and given no further encouragement or instructions. The data in this article can be used to help interpret the results. Gait speed may be a simple and accessible indicator of the health of the older person," the authors conclude.

In an accompanying editorial, Matteo Cesari, M.D., Ph.D., of the Universita Campus Bio-Medico, Rome, writes that because no evidence definitively supports the hypothesis that gait speed improvements are associated with better health-related outcomes, gait speed should not be considered as a primary target for interventions at this time.

"It represents a global marker of health status, and an optimal secondary and complementary outcome to support research findings, clinical decisions, or both aimed at modifying more pragmatic end points. … assessing gait speed in older persons is likely to be a useful research tool and may have a clinical role. Future research will be needed to determine whether gait speed has the potential to change the way in which a patient is defined as geriatric."
Story Source:
JAMA and Archives Journals. "Walking speed associated with survival in older adults." ScienceDaily. ScienceDaily, 5 January 2011.
Journal References: