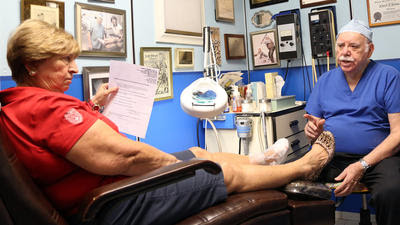 Would you trust a 96-year-old surgeon to put you under his knife?

In Fort Lauderdale, there's no shortage of patients for Dr. Albert R. Brown, a podiatrist who has spent more than six decades helping people solve their foot problems.

Often that involves filing down foot bones or the bony bumps — known as bunions — that form over bones.
That's what brought in Nancy Spinedi Delledonne, a part-time South Florida resident from Montreal. She had a bunion that kept her in terrible pain. "I was pestered by friends and relatives to take it out because you can't find shoes. I'm aching all the time." Finally she was convinced to visit Brown, but she concedes the thought of a surgeon his age "scared me a little."


"But after I came from my first appointment with him, I was really confident because his hands are stable, his head is all there and he still is passionate about what he does."

He's also having a great time. He regales patients with stories from his past, shows 19th-century photos of his Russian grandparents, points out photos on his wall of celebrity patients — singer Marvin Gaye, Canadian TV anchor Jocelyne Caine, and former hockey great Serge Savard — and tells an occasional dirty joke.

If Brown isn't the nation's oldest practicing surgeon, he's one of them. No such category exists in the Guinness World Records. "However, the category is active and open to applications," Sofia Rocher, public relations and digital coordinator for Guinness World Records North America Inc., wrote in an email.
Membership staff at the Florida Medical Association know of no practicing surgeons of similar age, says Erika D. Peterman, managing editor of the association's magazine.


At age 96, Dr. Albert R. Brown has spent more than six decades helping people solve their foot problems. The Fort Lauderdale podiatrist attributes his longevity to a moderate lifestyle: He stays away from fried food, and he enjoys a drink with dinner.
(Amy Beth Bennett)
The Florida Department of Health doesn't track how long medical license holders remain in practice, but "I can't imagine someone older than 96 practicing in the state," spokesman Brad Dalton says.
Fyodor Uglov was thought to be the world's oldest surgeon when he laid down his scalpel at age 102 in St. Petersburg, Russia. He died in 2008 at 103.
Brown says he has "some blood pressure problems but otherwise I'm surprisingly healthy." He attributes his longevity to a moderate lifestyle. "I stay away from fried greasy food. I enjoy a nourishing beverage with dinner" — champagne, wine or a martini — "and I never get drunk."
He sees an average of 18 to 20 patients a week and is busiest between January and April, when winter residents are here from Canada.
Brown doesn't seem impressed that he's still working at his age. He's most proud of the fact that he's still performing a type of minimally invasive surgery he helped pioneer decades ago.
Patients not only save money by undergoing the procedures in an office instead of a hospital; they save a lot of time that used to be spent in pain, Brown says.
Born in 1919 in Detroit, Brown became a pharmacist in 1940 and volunteered to help fight in World War II. He became a podiatrist in 1950 and quickly noticed how much pain resulted from traditional foot surgery methods. He says "little by little I figured out what we now call minimal invasive surgeries," shifted his procedures away from hospitals and since 1974 has worked exclusively from his office.
Brown was one of a handful of podiatrists to pioneer minimally invasive procedures, say alumni of the national organization founded by that small group, the Academy of Ambulatory Foot and Ankle Surgery.
David Zuckerman, a podiatrist in Cherry Hill, N.J., remembers frequent contributions by Brown and the other pioneers to a journal called Current Podiatry. Brown, known affectionately within the community as Uncle Al and the Father of Ambulatory Foot Surgery, was revered for sharing the techniques he developed, for free, via articles, lectures and one-on-one mentorships, Zuckerman says.
"I've sent many friends to train under him, and they're successful to this day because of that training," he says.
"He never took a penny" in exchange for the training, says Larry Kobak, former academy president and current health law attorney in Long Island, N.Y. "When I was coming up in the '70s, Dr. Brown was very generous to me. He never said 'no.' He always had a smile on his face. He had such a positive attitude about life."
Brown and his fellow pioneers were on the front lines of a long-ago battle among competing factions of foot doctors. "There was a lot of antagonism in the earlier years because I was getting everybody's patients," he says. "For properly performed minimal invasive foot surgeries, the patients require no medications for pain after the surgery. After a traditional bunion operation, patients are on crutches for three months. But my type of surgery, patients walk out in their regular shoes, drive home and require no medication."
With ambulatory surgery centers in wide use across all types of medicine today, Zuckerman says the argument is settled. But for Brown and his fellow pioneers, "the vision was never completed. [Podiatric surgery] is still hospital oriented."
One of Brown's proudest accomplishments was developing a simple procedure for treating a painful condition called Morton's Neuroma. That's a non-cancerous tumor that develops in the ball of the foot and can make patients feel as though they are standing on a marble.

"The most common procedure to eliminate Morton's Neuroma is to open the foot and cut out the nerve tumor. It's a simple procedure, but the post-op pain can last six months, if not longer." In addition, cutting the nerve branches kills all feeling forever in the third and fourth toe, Brown says.

In his studies, Brown noticed that discomfort for most stemmed not from the neuroma tumor itself, but because the tumor was pinched between small sharp points in the bones of the flanking toes. He developed a 10- to 12-minute procedure in which he files down the sharp points of the bones and leaves the neuroma tumor alone. "Since there is no pressure from side to side, the neuroma creates no pain," he says.

Some patients who also have lower back or leg pain receive an added benefit: Brown's procedure makes the pain go away if the nerve — called a sciatic nerve — is connected to the neuroma, he says
Brown's son, Steven Ames Brown, a San Francisco-based entertainment lawyer, says his father has always maintained a strict work ethic and to this day refuses to work fewer than six days a week. "I still think I'm a slacker next to him, and I'm a workaholic," the younger Brown says.

If his father has stumbled upon a formula for long life, it's that he continues to study, learn and practice, his son says.

"Last year when he was 95, he went to three different medical conventions, where he would sit for a week in classes. I think that was a secret that he found, which is mental acuity, and that requires concentration, that requires study, and that requires applying what you learned in some tangible way."
rhurtibise@sun-sentinel.com, 954-356-4071
Posted by OnPodiatry